Super Rugby AU and Aotearoa just keeps getting better and better, as both competitions march towards the finals.

Force fans must have nerves of steel, because they’ve really needed them lately.

They looked gone with time nearly up and the Waratahs in possession, and it appeared as if a maiden finals dream might end up just out of reach for the Perth side.

But hang on a second… a Waratahs botched lineout gave a last ray of hope for the home team, who put together a staggering 23 phases of possession deep into added time and were rewarded with a Domingo Miotti penalty kick to steal it.

The crowd went wild, Waratahs players slumped over and the Force live on in 2021. It all looked so promising for a Tahs side that are somewhat rejuvenated under interim co-coaches Jason Gilmore and Chris Whitaker.

Rookie Ben Donaldson was surprisingly named at fly half to replace an injured Will Harrison, but he showed no signs of early nerves, highlighted by his conversion of the Waratahs’ first try.

Running short on time and having trouble with his kicking tee, Donaldson calmly tossed it away and drop kicked a beautiful conversion, straight between the uprights.

This really was a see-saw battle right to the very end, but the Force – led by strong displays up front by runaway try-scorer Feleti Kaitu’u and lock Sitaleki Timani – just had enough at the end to snatch it.

Force fans will get to test their nerve again next week, as they host the table-topping Reds, while the Waratahs will try to avoid a winless AU season against the Rebels.

Referees never want to be the focal point of a rugby match, however, this clash was different for one simple reason.

The call Murphy was referring to was not hugely impactful on the game, but every rugby player on earth would’ve appreciated a ref admitting fault and correcting themselves in such a way.

On to the match itself… you get the feeling the Brumbies would scrummage and maul for an entire 80 minutes if they could.

Such is their strength at both facets of their game, they can summon a monstrous shove whenever they are feeling pressure.

The Rebels battled hard throughout, but were fighting early indiscipline, which resulted in yellow cards to winger Marika Koroibete and lock Trevor Hosea.

They had the better of the second half and were it not for one incredible blunder and some impressive Brumbies hustle, they could’ve stolen the result. 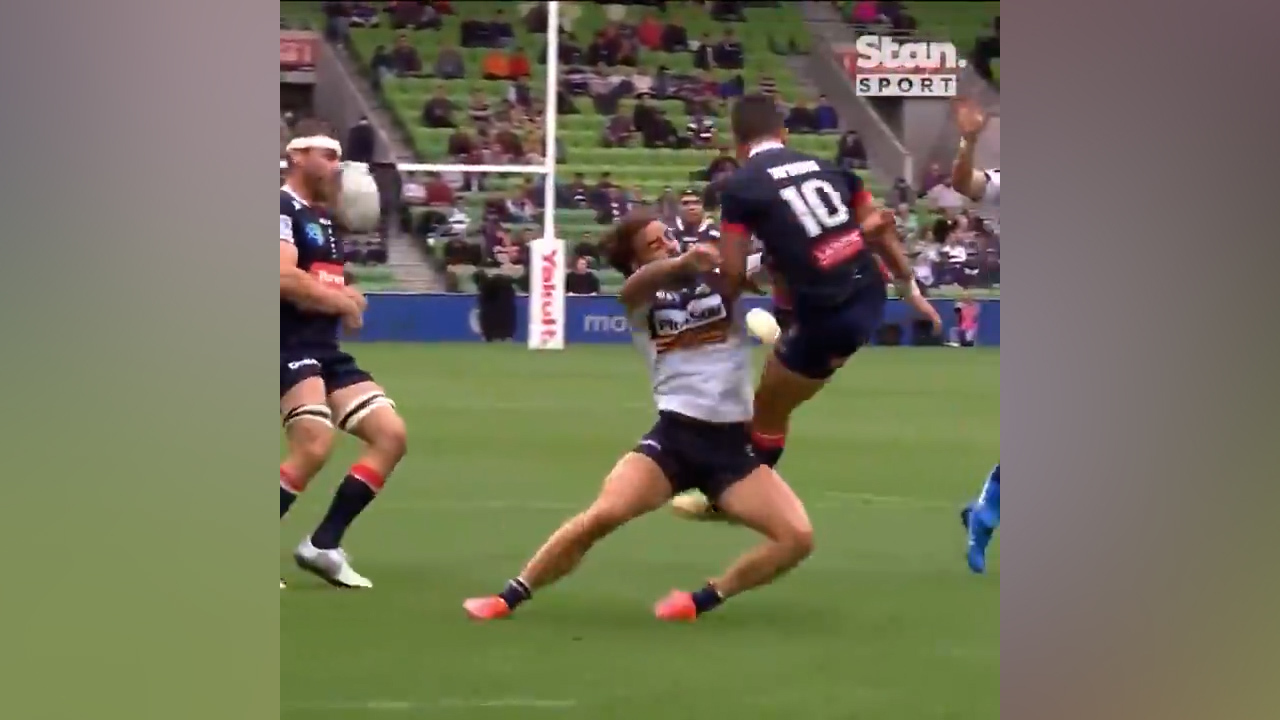 What’s been kindly described as an “all-time falcon blunder” gifted the Brumbies a critical try, as Rebels fly half Matt To’omua was pressured into a hurried clearing kick which hit teammate Josh Kemeny square in the face.

Some quick thinking from the Brumbies’ Rory Scott saw Bayley Kuenzle given the ball to scamper in with a clean pair of heels and promising mullet hairstyle to boot.

Again, the words “My bad” come to mind.

The Brumbies would not be caught from there and the Rebels will now face a virtual playoff game next weekend against the Waratahs.

The Highlanders may well be the most volatile of the many volatile teams playing Super Rugby right now.

The Dunedin-based side turned the form book upside down again, this time against a Blues outfit that is suddenly under real threat of missing out on a grand final berth that seemed all but assured a few weeks back.

The Blues did get off to a flying start – both literally and figuratively – as halfback Jonathan Ruru pulled off a freakish try, by diving and catching an Aaron Smith bullet pass from a lineout.

Ruru gathered the ball and fell over the tryline, as everyone was stunned as to how the man with the quickest pass on earth was picked off.

Smith was always going to bounce back though, as he played a critical hand in tries to Kazuki Himeno, Ngatungane Punivai and Jona Nareki.

The Blues did have moments of brilliance throughout the match, with Caleb Clarke and Rieko Ioane making telling breaks, only to be thwarted by some desperate try-saving tackles.

Leon McDonald’s men will look to rectify things in a hurry against the Crusaders, before what could be a qualifying final of sorts against the Chiefs.

The coldest team of Super Rugby Aotearoa have now transformed themselves into the hottest ticket in town.

Damian McKenzie was named at fly half for their home clash against the Crusaders, in an effort to take the attack to the defending champs.

I guess you could say it worked, too.

In the loose forwards, Luke Jacobson was immense, while openside flanker Lachlan Boshier returned to the side and was doing Lachlan Boshier things, by scoring a try and being a constant menace at ruck time.

The Crusaders led at halftime, thanks to tries by fill-in centre Leicester Fainga’anuku and speedy fullback Will Jordan, but spurred on by numerous “mooloo bells” in Hamilton, the home side Chiefs were always going to keep coming.

Both teams had been to golden point extra time the week prior, and it was McKenzie who would again come up clutch by kicking the winning points.

As Chiefs coach Clayton McMillan exclaimed after the game: “I guess that’s why they pay him the big bucks.”

Can’t argue with that.