Johnathan Thurston was baffled as to why Harry Grant was allowed to remain on field, scoring a crucial try, despite being knocked out.

Cowboys legend Johnathan Thurston has blasted the NRL’s loose enforcement around HIA protocols after Storm gun Harry Grant was allowed to remain on field despite being knocked out, going on to score a decisive try to shut-out the Roosters.

In a war of attrition at AAMI Park, the Tricolours were undone in an eventual 20-4 loss to their interstate rivals, and Grant was instrumental at hooker in a second half strangle.

First came a perfect ball from dummy-half in the 50th minute to set up halfback Jahrome Hughes to break the game open.

But it’s the minutes leading up to his 68th minute try to seal the win for Melbourne that has attracted contention.

Grant had been knocked out, left motionless face-down on the turf in a heavy collision with Roosters fullback James Tedesco in the 66th minute, albeit for a matter of seconds.

He was tended to by trainers and to the surprise of Storm great Billy Slater was allowed to stay on the field despite his brutal knock.

“You’d imagine he’d be coming off, Harry,” Billy Slater said in commentary at the time.

Two minutes, later he’d go on to all but end the match with a burrowing try, and it wouldn’t be until a further six minutes later that he’d eventually come off the field for a HIA and not return for the remainder of the night. 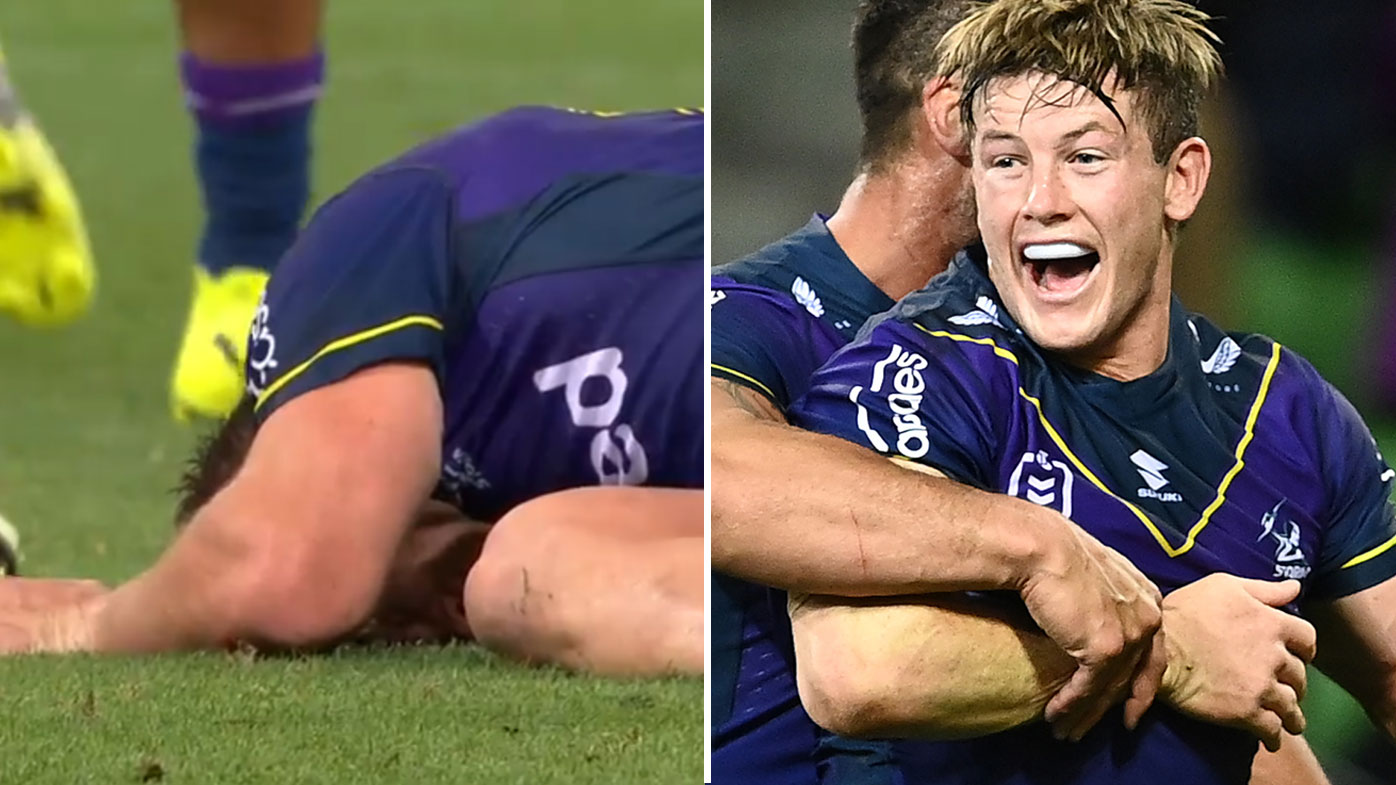 “He had a bit of a knock but then he’s done three of four amazing things since then and now they get a free replacement in the head bin?” Phil Gould said in commentary at the time.

Following the match, Thurston had nothing but praise for the blossoming hooker but was less than impressed that he was allowed to remain on field and alter the outcome of the game.

“He was outstanding while he was on the field, but I want to mention the head knock he got,” Thurston told Nine’s Friday Night Golden Point.

“Now, from my understanding the rules are, if you lie motionless on the ground, which he is, don’t you have to come off straight away for a head knock?

“He stayed out there for another 10 minutes, scored a try. He was crucial in that period after the head knock as well.

“If the game wants to take the head knock serious, this is what we need to get out of the game. He was so damaging after this but he shouldn’t have been on the field.”

NSW Blues coach Brad Fittler agreed and mentioned it was a behaviour he had noticed over recent weeks this season.

“I’m pretty sure there is a rule that if you lie for a second, you pretty much can’t come back on,” he said.

“I see it every week, the doctors for whatever reason will give them a couple of sets. Whether that’s until they find their feet, or whether they feel like they need that time to get their balance.

“But whatever it is, you’ll see players all the time get knocked out and it will take a couple minutes for them to come to the sidelines. I don’t understand why that’s not more urgent.”