Brad Thorn revealed he constantly questioned his decision to become the Reds coach in a fascinating post-game interview.

Brad Thorn revealed he constantly questioned his decision to become the Reds coach in a fascinating post-game interview with Stan Sport.

The legendary dual code athlete hung up the playing boots at 40 and quickly progressed in the coaching ranks to take the Queensland Super Rugby gig in 2018.

His introduction was rocky, to say the least, jettisoning big name stars like Quade Cooper, Karmichael Hunt and James Slipper and investing in local youth and a long-term culture rebuild.

After some predictable teething problems, Queensland’s patience in sticking with Thorn has paid off, reaching last year’s Super Rugby AU final and sitting pretty in 2021 with a perfect 6-0 record.

The Reds smoked the Rebels 44-19 in Melbourne on Saturday night as the gravelly voiced coach finally allowed himself a smile.

And a peek into him wrestling with his own career choices in a post-game chat with Nick McArdle, Michael Cheika and Morgan Turinui.

Former Wallabies supremo Cheika has watched on with keen interest as Thorn has grown from a somewhat reluctant coach to a man now relishing his work.

“You nailed it mate, there’s so many times I said ‘God, why am I here, why am I doing this?’ I came back to Brisbane and my plan was a couple of years maybe, network and find out what I’m going to do with the rest of my life, you know, a different job. 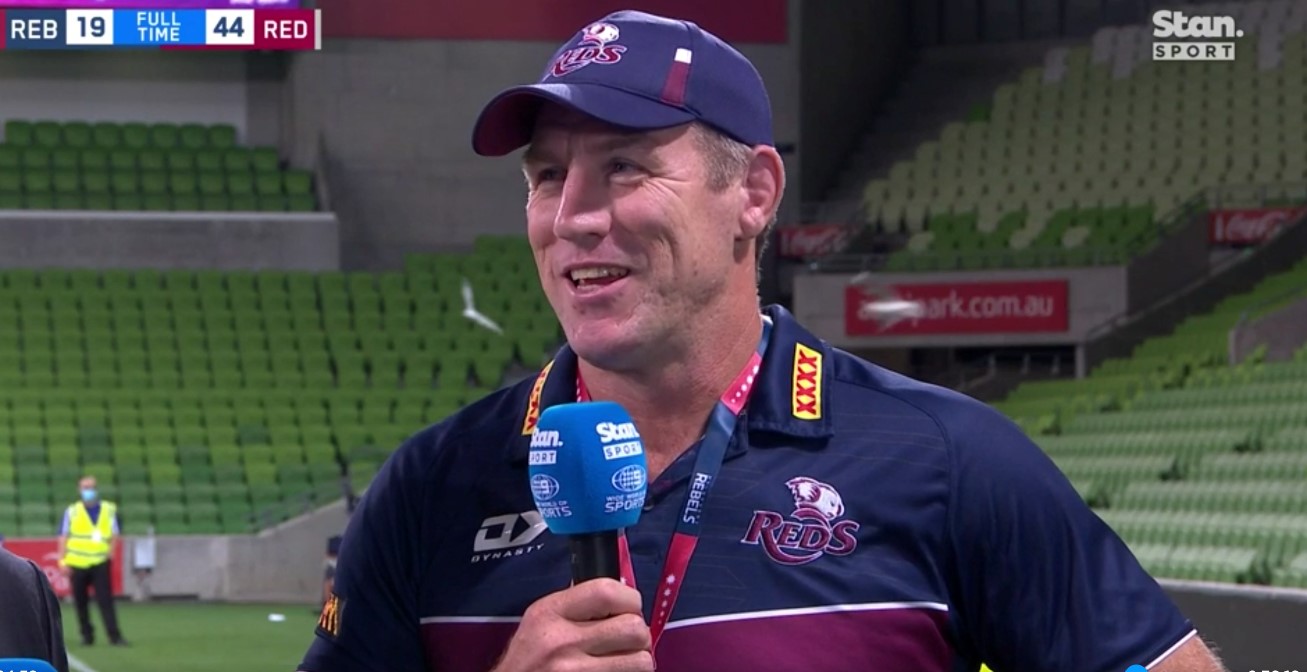 “But it sort of worked out that this situation happened,” Thorn told Cheika.

“For me the most pleasing thing is just the long game. Just persevering and having a group of people, the staff around me, how tight we are. I didn’t understand staff, I thought coaching was just on the field.

“All the stuff players don’t get, you know, we go home. Staff is so important and we’re really tight. That COVID situation brought us even tighter and the tightness of the team… all that’s good about rugby.”

Thorn then elaborated on how he had been able to build a squad that looks capable of emulating the achievements of the famous class of 2011.

“I thought if it was about money they’d just go somewhere else,” Thorn said.

“And mateship. To me the best thing about rugby as a six-year-old, and then when I was a 40-year-old playing it’s the mateship, the camaraderie I love.

“So that’s what I went hard on. Just caring about what you’re a part of – it’s got to mean something.”

Thorn had no hesitation in labelling the Rebels win their best of the season as they eye another mouthwatering clash with the defending champion Brumbies next weekend.

“I’ve been like the sour guy, I haven’t been happy for five games,” Thorn said.

“Tonight, so much happier.”