The UFC heavyweight title belt was barely around Francis Ngannou’s waist before he called out his next opponent.

Francis Ngannou’s UFC heavyweight title belt was barely fastened around his waist when he began thinking about the fearsome foe already plotting to take it away from him.

Whether it happens in coming months or not, Ngannou knows he’ll be seeing Jon Jones in the cage very soon — and the new champion welcomes the showdown. 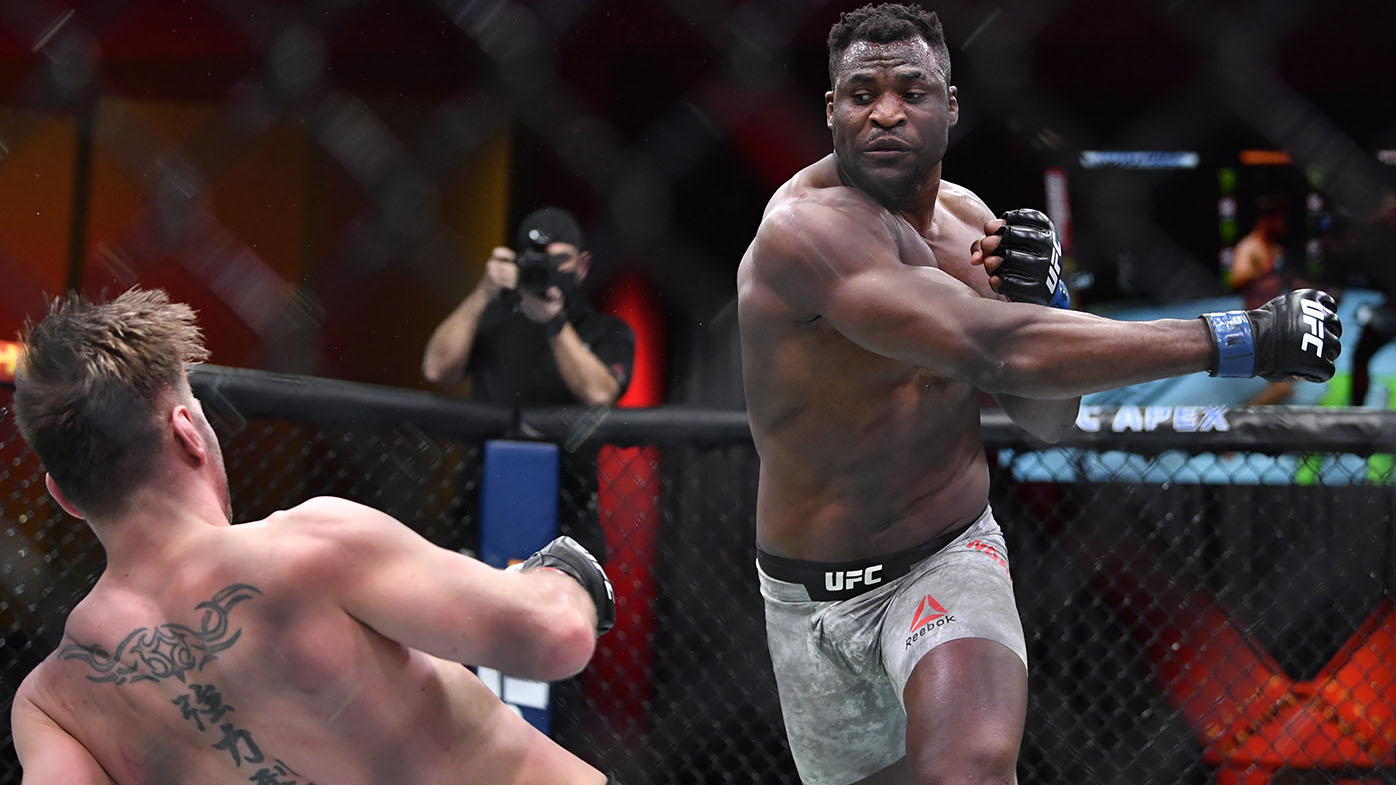 “Well, I think Jon Jones makes more sense for me,” Ngannou said. “But either way, I’m going to fight.”

A second-round knockout of Stipe Miocic at UFC 260 on Sunday (AEDT) was the culmination of Ngannou’s remarkable path from poverty in Cameroon to international sports stardom. But the 34-year-old veteran has been around this game long enough to know his next fight is always more important, and Jones looms directly ahead.

“In my opinion, Jon Jones is the greatest of all time in mixed martial arts,” Ngannou said. “Him moving up is going to be a challenge I will take. But I am the champ. He is coming up and looking for me. I am ready any time soon.”

Jones relinquished his light heavyweight belt last year and began putting on muscle for a move up to heavyweight. A man whose lack of personal discipline has prevented him from being universally acknowledged as the greatest fighter in MMA appears to be taking this quest quite seriously, and Ngannou is aware of the challenge facing him to retain his belt.

But after Ngannou’s ferocious performance in his rematch against Miocic, UFC president Dana White suggested Jones is the one who should be wary.

Jones and White resumed playing the games that have defined their relationship moments after Ngannou dethroned Miocic — the most accomplished heavyweight champ in the promotion’s history — with two phenomenal knockdowns.

“Show me the money,” Jones tweeted immediately after Ngannou’s hand was raised.

In the news conference after UFC 260, White said he was interested in a rematch with Derrick Lewis for Ngannou’s first title defence. White also said Jones could jump past Lewis — while implying that Jones might not actually want to do so.

“If Jon Jones really wants that fight … Jon Jones knows he can get the fight,” White said. “He’s got to call and do it. It’s easy to say you want the fight. We can make that fight tonight if he calls us.”

That posturing offended Jones, who aired his displeasure online for the next 12 hours.

“Why does a fighter have to be afraid the second he mentions he wants to get paid his worth?” Jones asked. “What an insult. … Conor McGregor wants big money, it’s expected. Jon Jones wants money, now he’s (scared).”

Jones also said Lewis could have the first shot at Ngannou if White wants it: “No need to rush a great thing. I’ve already had a Hall of Fame career, I’m going to need some bread.”

The posturing took some focus away from Ngannou, the likable, soft-spoken muscleman with unbelievable punching power. He is the UFC’s third current champion from Africa and he heralded his win as the biggest breakthrough yet for fighters from the continent.

“This is just a symbol of dedication and perseverance,” Ngannou said. “Somebody asked me what I wanted to do with the belt. Maybe I will find a public place to put it in Cameroon for kids to look at and realise that anything is possible.”

While he waits to learn the identity of his next opponent, Ngannou plans to relax in Las Vegas, where he now lives and trains, with the knowledge his work and sacrifice have been rewarded. He also declared his intention to be more active as the champion than Miocic, whose only fights in the previous three years were his lucrative trilogy with Daniel Cormier.