Essendon coach Ben Rutten has been slammed for his apparent inactivity while coaching from the interchange bench.

Essendon coach Ben Rutten has been slammed for his apparent inactivity while coaching from the interchange bench during Saturday night’s upset loss to Hawthorn.

Despite holding a 40-point lead in the second quarter, a youthful Bombers squad was eventually chased down by the final whistle in an almighty comeback from the Hawks.

Amid the unfolding drama, Rutten made the move to sit on the interchange bench and watch the game rather than being a vocal figure around his players.

AFL greats David King and Leigh Montagna questioned the move by Rutten, confused by what he was trying to achieve.

“It’s not the performance. The game was the game. They set up a fantastic lead and this is more specific to the sellers of who you are as a football club and who you are as a coach. I call him Benny Idle,” King said on Fox Footy’s First Crack. 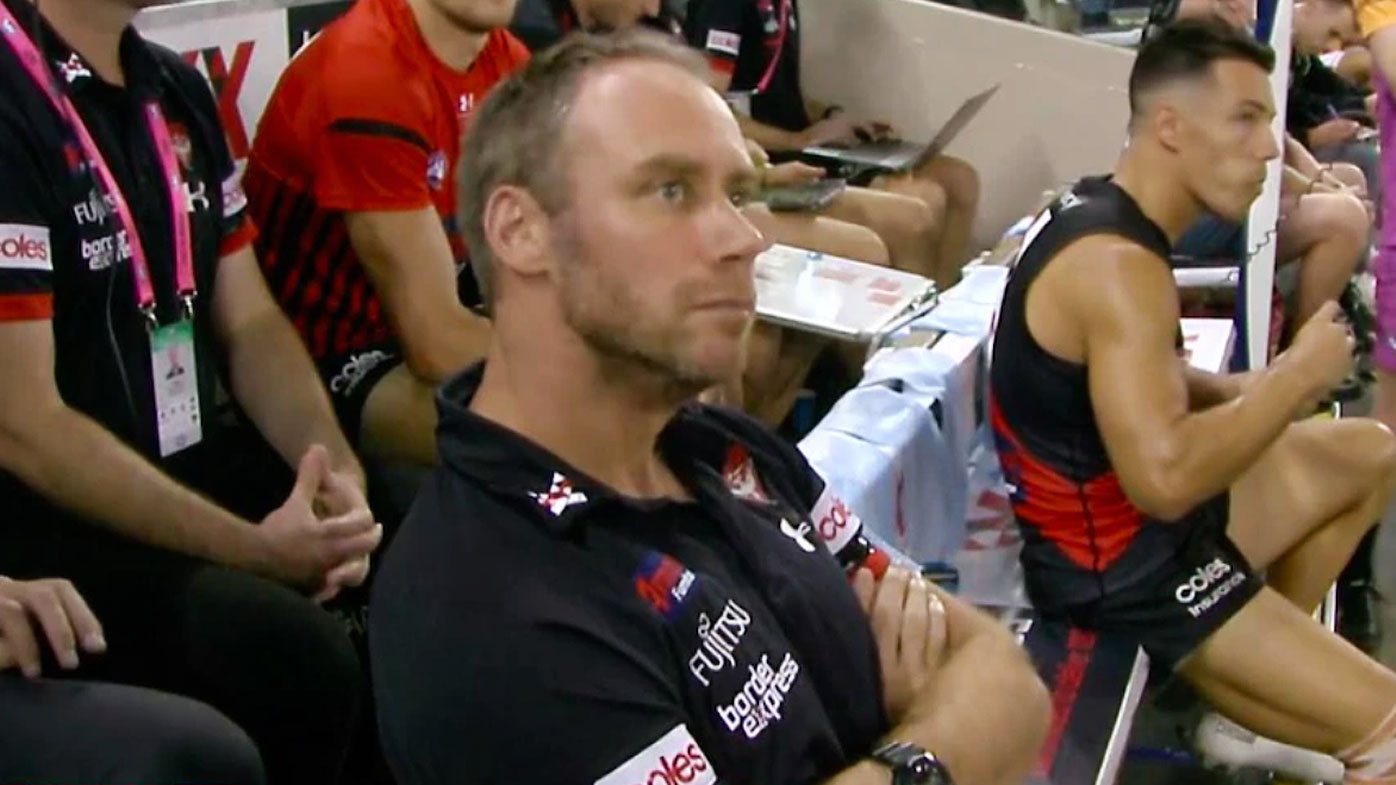 “He sat there and watched the game, he had the best seat in the house, he was a spectator for 40 minutes of footy when the game was sliding.

“Clearly (Tom) Mitchell out of control, they led by 40 points. You go to the bench for a reason, to reinforced behaviour, to encourage, to look players in the eye and eyeball them. I didn’t see him do any of that, I just saw him sitting there and watching the game.

“What is the point of being there? I just don’t understand it. The Hawks kicked seven goals in a row. There was no great movement, there was no urgency, there was no shift

“Coaches that go to the bench go there to get something out of the individual. I see John Longmire down there, Chris Fagan down there. Really encouraging, really demanding.”

Montagna said he was surprised Rutten hadn’t read the room given fans were never sold on John Worsfold for sitting at ground level last season.

“Surely he would’ve heard the noise last year about a lot of Essendon fans critical of John Worsfold for sitting on the bench?” Montagna said.

“Not showing any emotion or really communicating with his players, standing up and yelling out to players on the field. Seeing Ben Rutten do that Round One, particularly to concede eight goals to one in the third quarter, I was surprised by it.

“How are you controlling the game? How are you actually able to see what is happening clearly to be able to make some moves to stop it, like Tom Mitchell or like the run on that Hawthorn got in the third quarter at ground level?

“You cannot see it at ground level, so he’s relying on his assistant coach. Yet it is his first game in charge. I thought it was a strange look and something we will have to keep an eye on.

“You’re either upstairs or talking to the players every time on the bench and getting up being vocal. It was neither of those.”