Andrew Johns and Brad Fittler have shredded Wests Tigers over their 40-6 drubbing at the hands of the Sydney Roosters.

Rugby league legends Andrew Johns and Brad Fittler have launched scathing attacks on Wests Tigers over their 40-6 annihilation at the hands of the Sydney Roosters.

Fittler even went as far as hammering the Tigers with the following extraordinary remark: “They should be walking around giving every person that came here their money back. What a bludger of a day.”

Those were the crushing words of the Roosters and Penrith Panthers great as Luke Keary, James Tedesco, Brett Morris and Jared Waerea-Hargreaves propelled the Tricolours to victory at Campbelltown Sports Stadium, making the wet conditions look sunny and dry.

“The one thing the fans demand is you try and you try for the full 80,” Fittler said during Nine’s coverage.

“It doesn’t look like the Tigers are doing that.”

Johns slaughtered the Tigers repeatedly throughout the match but perhaps saved his most heated spray for the first try of the second half.

Keary received the footy from Waerea-Hargreaves at halfway, dummied and pierced a gap between Luke Brooks and Joey Leilua, fended off Daine Laurie and popped a flick pass to Morris, who crossed for a 47th-minute try.

“Well they started the set a metre out from their own line, the Roosters, and the Tigers let them roll up field. They didn’t compress their defence up or fly out of the line to put pressure on the Roosters,” Johns said. 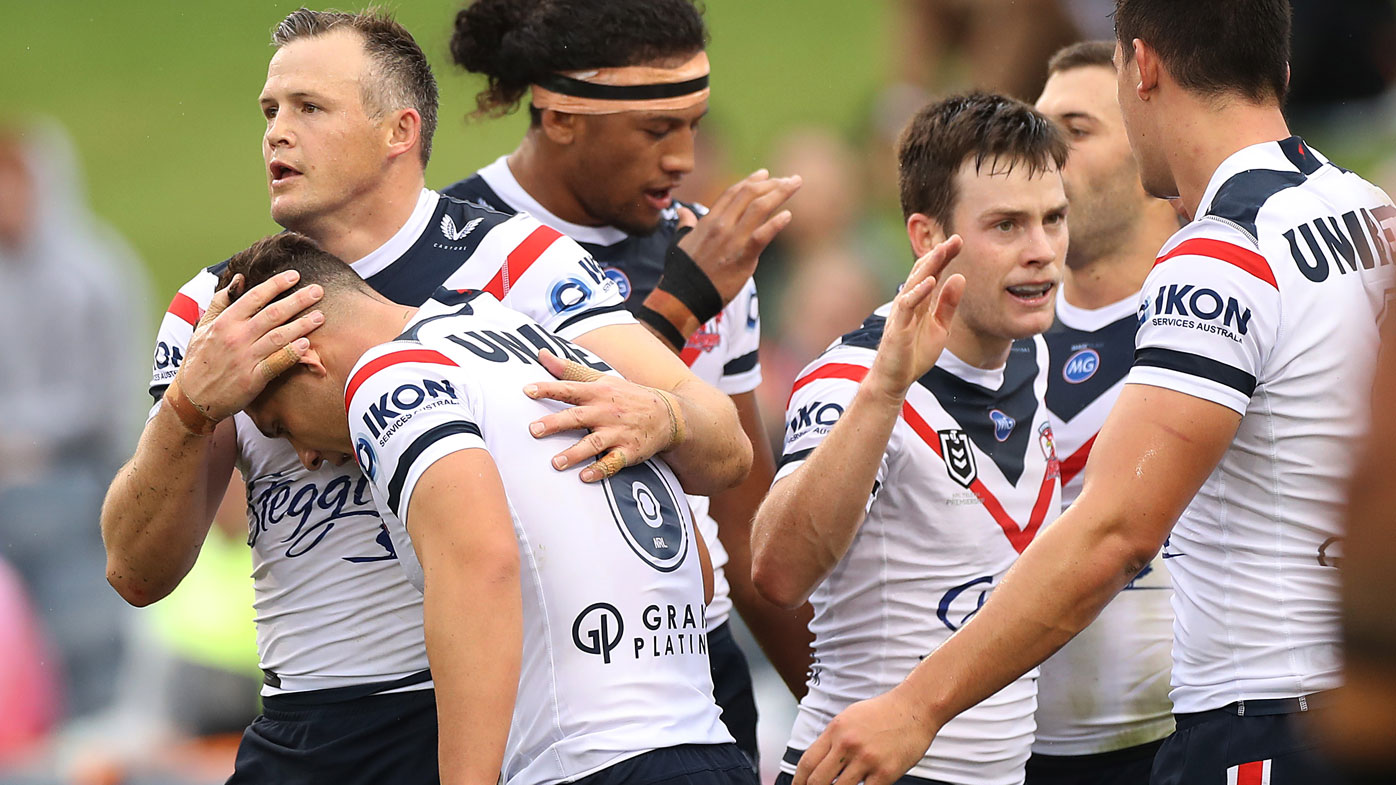 “Then on the fourth play they go wide and the defence was way too passive, on their heels.

“Playing on someone like Keary, if he gets on the outside of you he just puts you to bed.

“There’s just no urgency whatsoever in the key areas for the Tigers.

Fittler asked Johns if he thought the Roosters’ sliding passing game made the Tigers panic – and the triple Dally M Medal winner reignited his tirade.

“Look at the outside defence, Freddy. They’re all back and passive, which gives Keary time,” Johns said.

“When the ball went out the back to Keary, Joseph Leilua should’ve been in his face and smashing him outside in. He was a metre behind Luke Brooks and sitting on his heels and then they went straight into slide mode. You just can’t be so passive when you’re playing a team with so much attack and speed.”

On the contrary, Johns had enormous praise for the Roosters in the wake of the dominant win.

“In the wet conditions, the Roosters, the way they attacked – it was sensational,” Johns said.

“But once again, we’re talking about the Tigers – just how poor they were.

“The Roosters, considering the players they had out – five, six regular first-graders and their big stars – just goes to show what a great club and a great team they are.”