One team was always going to depart Sky Stadium with heads bowed, their season in awful trouble. Somehow, that team was the Hurricanes.

One team was always going to depart Sky Stadium on Saturday night with heads bowed, their season in awful trouble.

Somehow, that team was the Hurricanes, as the Damian McKenzie-inspired Chiefs stormed home for a 35-29 victory in Wellington to break a horrid 11-match losing streak.

Their visitors rattled up three tries and 21 points in nine minutes to hit the front, before a monster 50m-plus Jordie Barrett penalty put the Hurricanes back in front with six minutes left.

No 8 Luke Jacobson scored the matchwinner after sustained forward pressure, diving over to break Hurricanes’ hearts on their special Mana Moana night celebrating their Maori and Pasifika influence. Jacobson sealed it with a big turnover as the Canes tried desperately to hit back. The No 8 along with McKenzie, halfback Brad Weber and second five-eighth Quinn Tupaea were among the Chiefs’ best in a passionate, desperate display.

The Hurricanes, meanwhile, were shattered. Captain Ardie Savea was on his haunches, the new skipper now having to rally his men who somehow let a winning lead and dominant position slip on the back of a Salesi Rayasi double. And they face a trip to Dunedin for the Highlanders in just six days.

The Chiefs came to town facing an unwanted record: 12 straight losses to beat the Highlanders’ 11 from 2012-13. 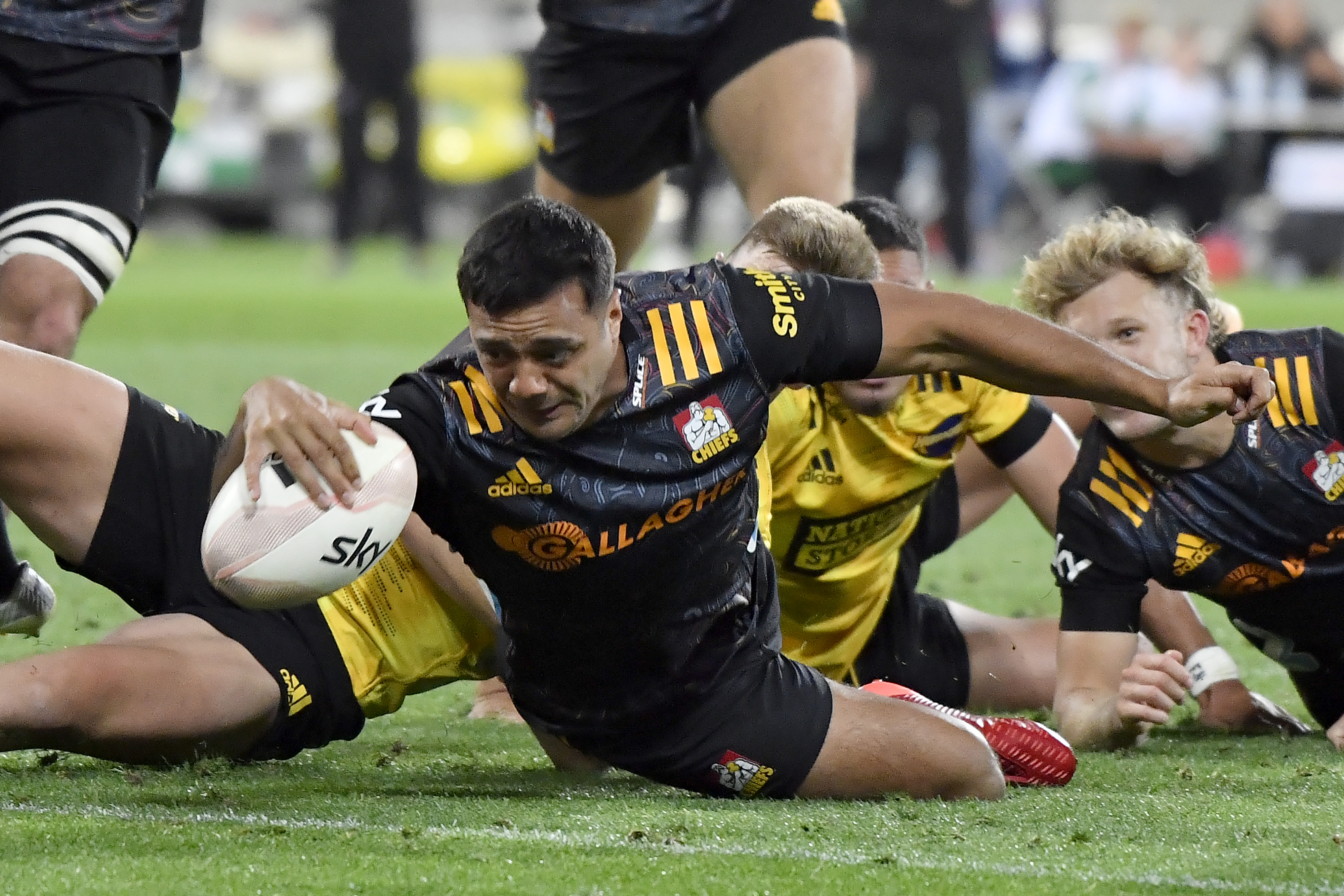 It was one year and two weeks since they last won. Remember it? A 51-14 stroll in the park against the Waratahs in Wollongong on March 6, 2020. A week later the Hurricanes pinched a 27-24 victory in Hamilton and it was curtains.

For a match between two winless sides there was no holding back, as the Hurricanes got up a head of steam early and led 26-7 after a rollicking first half. They were confident and their big game players stepped up.

With Orbyn Leger making his first start at first-five, but having minimal impact, Barrett eased some of the load and was a big presence again, on attack and defence.

Barrett sparked the first try from 60m out, a run around that saw him saunter into space and put away halfback Luke Campbell beside the posts in his first start.

The Chiefs struck back almost immediately, hooker Samisoni Taukei’aho rampaging through an attempted Ardie Savea tackle and feeding Kaleb Trask, another new man in No 10 for 2021.

Hurricanes hooker Ricky Riccitelli, in the absence of injured duo Asafo Aumua and Dane Coles, took on their roles and charged about. He struck back for the Canes, roaming wide and sliding over from a Ngani Laumape pass after another run-around fooled the Chiefs defence.

The visitors just couldn’t take a trick, even if their scrum monstered their hosts on occasion. Passes were spilt and referee Ben O’Keeffe penalised them 6-2 in the first half. Then there were more errors; McKenzie kicking out on the full and Trask dropping a bomb cold. 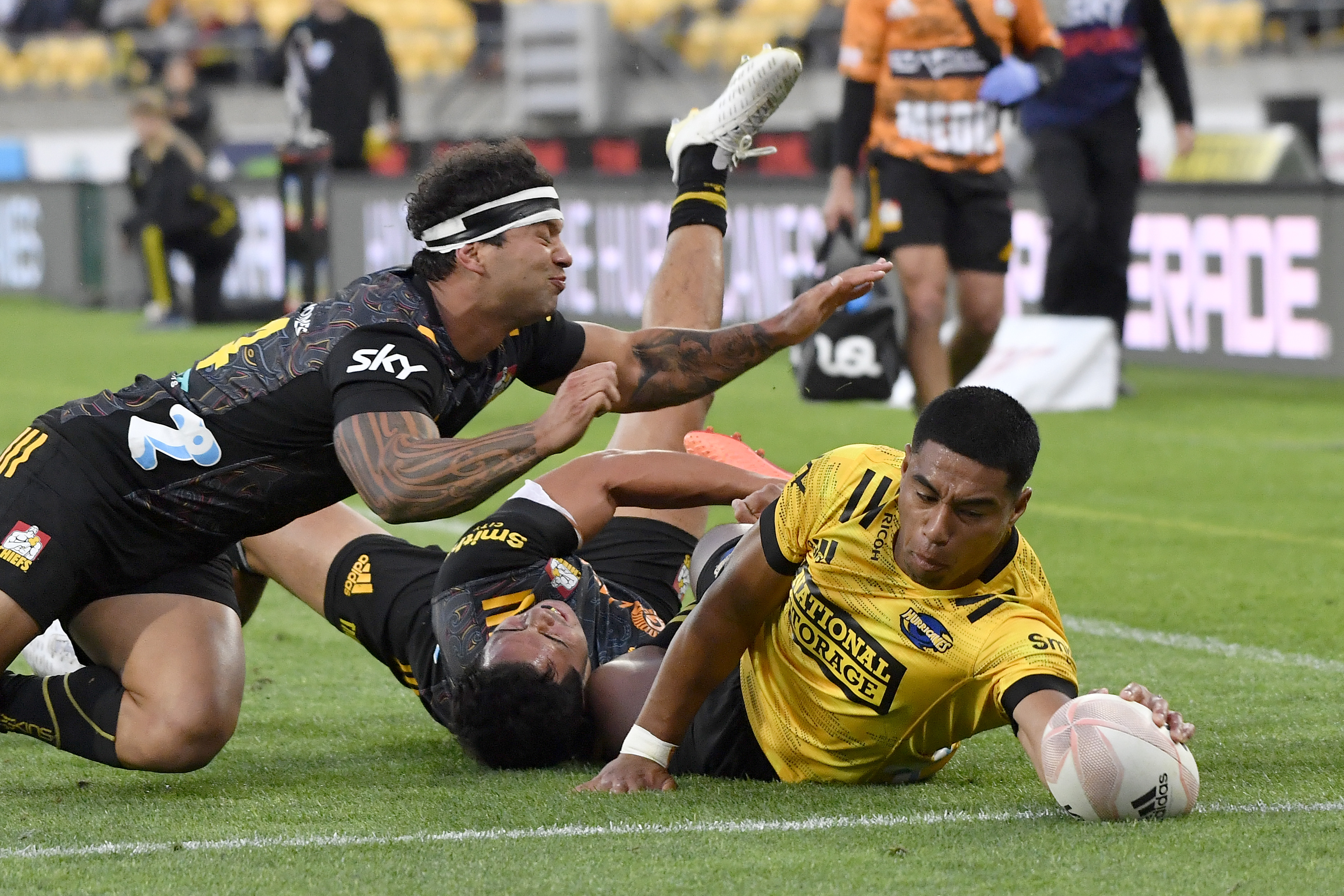 That brought left wing Rayasi into the game in his first start for 2021. Laumape, in a super piece of play, hit Rayasi with a cross-kick in the left corner and the wing reached out to score.

Then, three minutes before the break, Rayasi loomed into the line and strolled through some non-existent defence to give the Hurricanes a decent buffer at halftime.

Weber was held up over the line, then early in the second half McKenzie crossed but was penalised for a double movement on the television match official’s intervention.

It looked like it would never happen for them, then, suddenly, a switch was flicked and McKenzie began to impose his presence.

Chase Tiatia, on for Trask, darted across after some sustained pressure in the 57th minute and finally there were smiles on Chiefs’ faces. They went bang-bang, and it was suddenly game on, when McKenzie did his thing and returned a Leger bomb brilliantly, scything through and feeding Tiatia who put Weber away for the try of the match.

In a blink, the Canes’ lead was shorn to five entering the final quarter. Then, when lock Naitoa Ah Kuoi in his home town scored from a rolling maul, it was 21 unanswered points in nine minutes and these winless Chiefs were finally in front with 10 to play.