Commentators and fans were left stunned by a conversation mid-fight during a flyweight clash at UFC 259.

Commentators and fans were left stunned by a conversation mid-fight during a flyweight clash between Tim Elliott and rival Jordan Espinosa at UFC 259.

During highly entertaining preliminary bouts ahead of the Israel Adesanya vs Jan Blachowicz main event, broadcast microphones picked up Elliott accusing Espinosa of some disturbing allegations as both fighters wrestled on the mat.

The tense exchange was easily picked up with no fans in attendance at the UFC’s Apex Arena in Las Vegas.

Espinosa responded: “You don’t know the full story” – to which Elliott replied “I know enough.”

Espinosa then fired back: “You don’t know sh-t.”

“Wow, that’s ugly. There were some ugly words being spoken down there between these two,” he said. 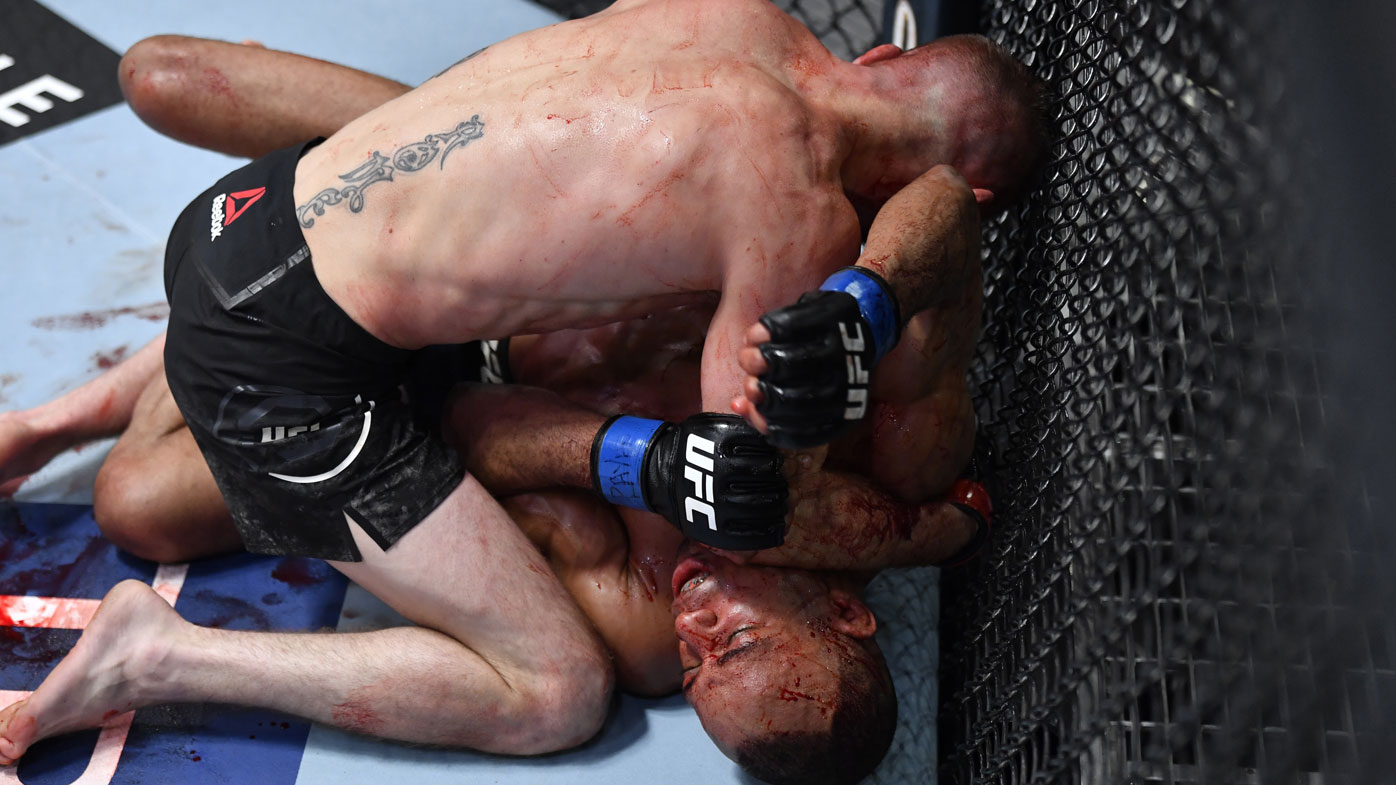 Elliot won the flyweight bout via unanimous decision (30-27 x2, 30-25) and explained his position after the fight, stating he didn’t mean for the conversation to be made public.

Elliott told reporters he had received a Facebook message from a girl with choke marks on her throat via reporter Adam Hill of the Las Vegas Review Journal.

“I didn’t say that for anybody else to hear because I don’t know the whole story,” Elliott told reporters.

“I was messaged on Facebook – I don’t want to name any names – but a long message with some pictures and some Snapchat back and forth between Jordan Espinosa and another girl. Pictures of her with choke marks on her neck.

“I don’t know the whole story, and it wasn’t something I wanted the whole world to hear. I wasn’t trying to, that wasn’t my, that was supposed to be between him and I. I didn’t know the mic was going to pick up on it.

“I don’t want to go into too much details but again it’s not something I’m proud of, for everyone to hear, but I’m glad that it’s out there.

“If it’s true, I don’t know, that’s why I didn’t say anything on the internet, because I know people lie. But it was pretty disturbing the things and the pictures I received.”

Elliott also addressed claims he was wiping blood blood into Espinosa’s eyes with his forehead, denying the tactic was linked to the accusations.

“The coach said your blood is going right into his face, use it. He’s smart. It worked, it helped.”

However, Elliot did admit the Facebook messages had motivated him to inflict more pain on his rival.

“I wanted to hurt the guy. I wanted to make him pay. I want to win either way, I don’t do this to get aggression out. I let my emotions get the best of me because of the message I received,” he added.

“That’s something I am going to have to work on… because I can’t let that happen again.”

Even though Elliott felt compelled to act on the claims, the American fighter acknowledged bringing up such a topic in the octagon may have been the wrong move.

When asked if he would speak to Espinosa to get his version of events, Elliott said he would.

“He’s right. When he said that [that Elliott does not know the full story]

“I thought about it at that point. I was trying to have a personal conversation with him which isn’t something I should be doing anyway. I should focus on winning the fight.”