Virat Kohli described his side’s 10-wicket win over England as “bizarre” after they smashed Joe Root’s men inside two days.

India captain Virat Kohli has described his side’s 10-wicket win over England as “bizarre” after they smashed Joe Root’s men inside two days.

Rohit Sharma hit a six to lead India past their target of 49 without losing a wicket in Ahmedabad. The win was set up by spinner Axar Patel, who took 11 wickets over two innings, as India totally outplayed their opponents in the day-night game to take a 2-1 lead in the four match series.

“I have never been part of a Test match where things have moved so quickly,” said Kohli.

“It was bizarre that out of the 30 wickets, 21 were off straight balls.”

“The result went our way but the quality of batting was not at all up to standard from both teams to be very honest,” added Kohli.

Spinners were dominant, claiming 28 of the 30 wickets that fell on the unpredictable track. 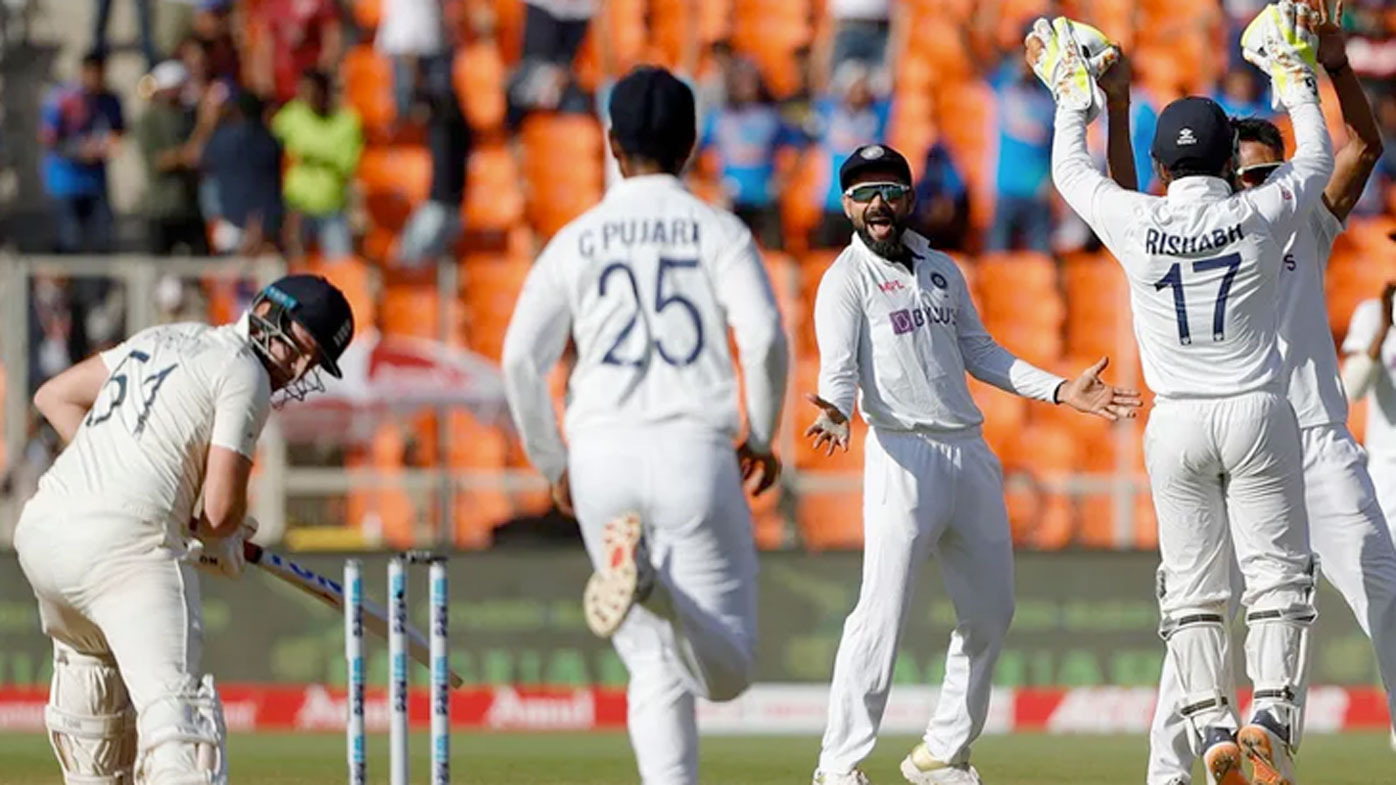 Patel has now taken at least five wickets in three of the last four innings of the series. He was brilliantly supported by Ravichandran Ashwin, who took seven wickets in the match.

Patel said he thrives on the mind games with opposing batsmen. “Strangle their runs and then get them to make mistakes. Bowling more and more dot balls is my strength,” he said.

It was only the second Test in India’s cricket history to end in two days. The last was their hammering of Afghanistan on their Test debut in Bangalore in 2018.

The result means England is out of contention for the World Test Championship final, with India needing a win or draw in the fourth and final Test to book their meeting with New Zealand at Lord’s in June.

England captain Joe Root, who claimed career-best figures of 5/8 in 6.2 overs, said that the surface was “very challenging, very difficult” and that it was up to the International Cricket Council, not the players, to decide whether it was “fit for purpose”.

“I am sure that off the back of this things will get looked at (by the ICC)…. It has certainly been a challenging surface, a challenging two surfaces the last two games,” he said.

“It’s a real shame, it’s a fantastic stadium, there are 60,000 people come to watch a brilliant iconic Test match and I feel for them. They have come to watch Virat Kohli face Jimmy Anderson and Stuart Broad or Jack Leach, and watch Ashwin against our top batters like Ben Stokes. I almost feel like they have been robbed, (that) instead they have had to watch me get wickets, which shouldn’t be the case.”

The pitch and the result caused a massive stir among cricket fans and greats of the game who could not believe what they were witnessing.

Former England captain Michael Vaughan described the pitch as “sh—” and a “complete lottery” while Mark Waugh branded it “unacceptable.”

England legend Kevin Pietersen tweeted: “The batting from both teams was awful! The wicket wasn’t horrendous! It’s just that the batting was dreadful!”

Former England fast bowler Chris Tremlett wrote: “Well played India, the better side in this game but that was some of the worst Test cricket I’ve ever seen.”

Cricket analyst Simon Hughes said: “That Test left me numb. Still stuck in my studio chair trying to figure it all out.”

ESPNCricinfo reported the pitch was rated poor by the ICC. The website confirmed it will see the ground given three demerit points but India will not be docked points on the World Test Championship table.

The final match starts on March 4 in the same stadium.