Naomi Osaka showed her ruthless streak by winning the Australian Open then showed another side of her personality.

Naomi Osaka has proven without a shadow of a doubt that she is the successor to Serena Williams as the queen of women’s tennis after staving off a first set challenge from Jennifer Brady to win the Australian Open final 6-4 6-3.

Ruthless in her execution on the court, Osaka was typically charming in her acceptance speech afterwards, with the crowd at times in stitches and others in rapturous applause as they got another window into the multi-faceted personality who is becoming the biggest star in women’s tennis.

However, despite the dominant scoreline, the Japanese star didn’t have the final all her own way, admitting afterwards that Brady was “going to be a problem” for her after awkwardly asking her if she should call her “Jenny or Jennifer”.

Osaka was assured when she needed to be to stop a bulldozing first set comeback from Brady and awesome once the second set began, breaking early before bullying the American on the way to the finish line.

At the age of 23, Osaka has now won four Grand Slams, two Australian Opens and two US Opens, to make her the undisputed superstar of her generation.

She is just two Slams behind Serena Williams’ tally at the same age, with the 23-time major winning 39-year-old having already achieved the ‘Serena Slam’ by her 24th birthday.

Yet, according to Jim Courier, who commentated the match for Nine, Osaka is headed for a career that will put her in the pantheon of all-time greats that Williams has occupied for more than a decade. 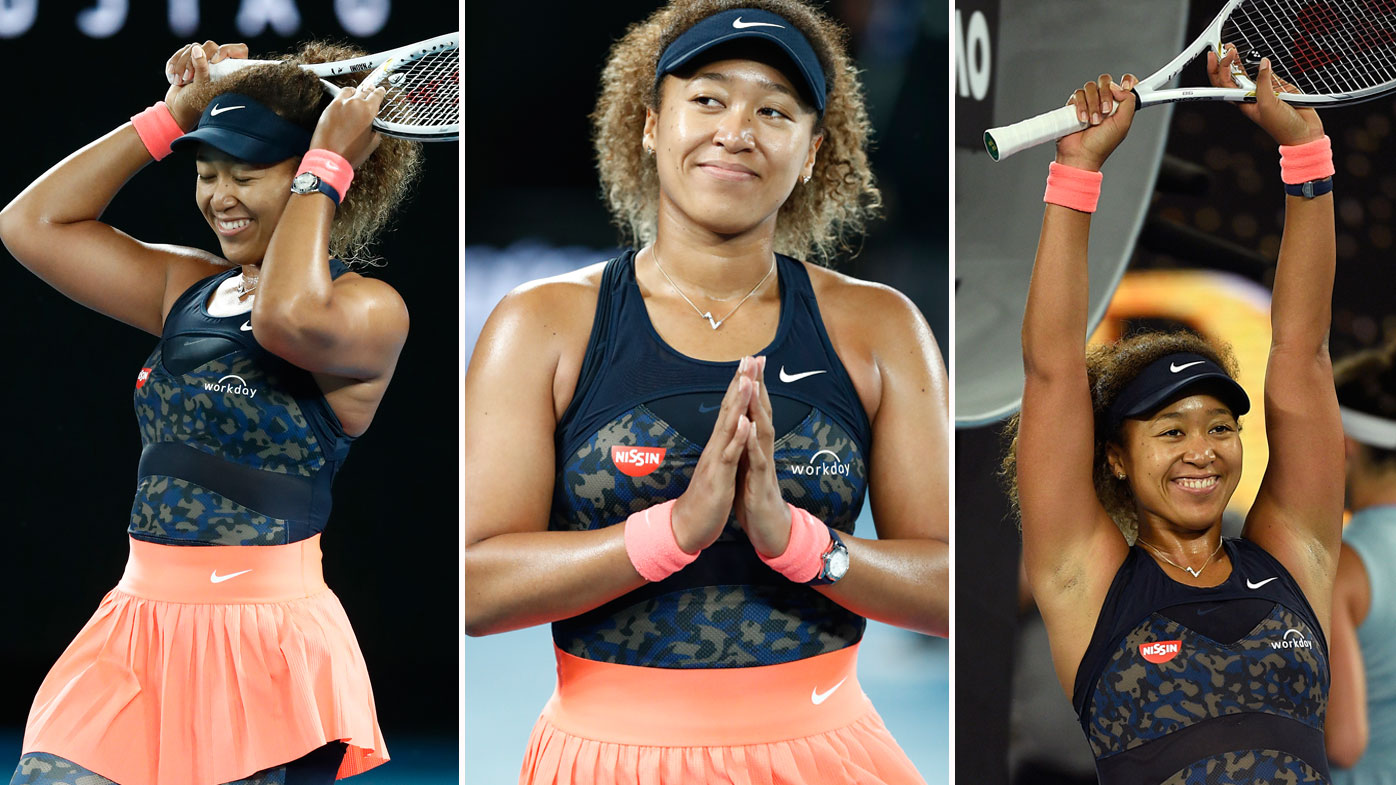 “She faced the pressure, break point at 4-4 in the first set. She was able to withstand that moment and she went on a tear that set up this moment.”

Courier’s co-commentator Sam Smith added that Osaka was just what women’s tennis needed at a time when Serena’s career is starting to wind up.

“She’s very much seen as the successor to Serena. Serena at age 23 had already won six, she’d already won the Serena Slam so she’s got a little bit of catching up to do,” Smith said.

While Osaka demonstrated her ruthless streak when the final got tight, she also showed her class, with good sportsmanship and appreciation for Brady’s best moments throughout.

In fact at one stage it prompted Smith to question if the two finalists were being too nice to each other, with Brady also quick to applaud Osaka winners.

After the championship point had been won, Osaka showed another side of her personality, the zany side, half climbing the wall to the player’s box so she could pass her coach her phone and ask him to start filming.

It was an adorable sight, that gave a snapshot of Osaka’s tenderness that so contradicts the power she hits the tennis ball with.

The adoring Rod Laver Arena crowd gave Osaka a huge roar of approval as she got up to accept the Daphne Akhurst Memorial Cup, with the 24-year-old already becoming a fan favourite in Melbourne.

She seemed almost stunned by the reception, giggling when she first got up to get her trophy, before settling in for a wonderful acceptance speech that gave the crowd exactly what it wanted.

“Do you like to be called Jenny or Jennifer,” Osaka started, turning to her beaten opponent.

“Jenny,” Brady replied, before Osaka addressed her as Jennifer anyway, much to the crowd’s amusement.

“I told everyone who would listen that you’re going to be a problem,” Osaka said. “I was right,” she continued as the crowd laughed hysterically.

“it’s really incredible to play you and see your growth over the past few months. It’s cool for me to see and I know that you’re probably working very hard, so I want to congratulate your team over there too.

“My team’s like my family, so I’m sure your team probably have a lot of great adventures together, so congratulations to you guys as well.

“I know you’ve talked about your mum so I’m sure she’s really proud of you and I know everyone around you and your family are definitely very proud of you.

“I think we’re going to play a lot more matches so here’s to that.”

Osaka then thanked her team, joking that she’d “been with them too long”, after going through quarantine together before getting the 2021 season under way.

“they’re like my family,” she said. They’re the ones who are with me through my training, through my matches, through my nervous talks before my matches, and I’m really appreciative towards them so I really want to thank you guys. This one’s for you.”

She finished by thanking the crowd, a feature that the players had almost got used to playing without but clearly appreciated having it back for large parts of the Australian Open.

“Thank you for opening your hearts and your arms towards us, I think for sure playing a Grand Slam right now is a super privilege that I won’t take for granted.”