Novak Djokovic has unwittingly given Daniil Medvedev some ammunition for their final due to a gaffe by one of his sponsors.

Head is Djokovic’s racquet sponsor, with the Serbian star’s image plastered all over its advertising as one of the company’s top ambassadors. 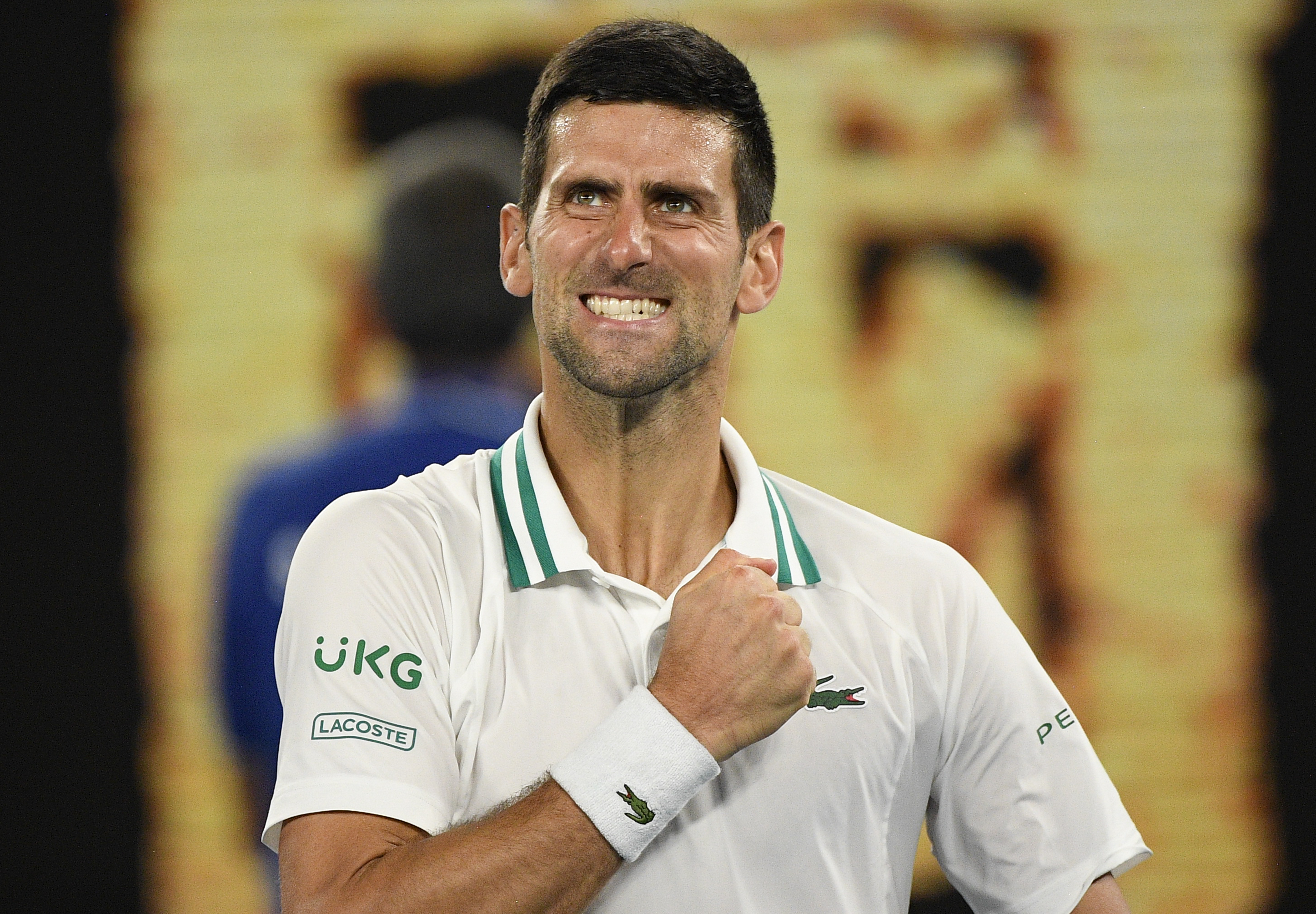 Rothenberg, the journalist whose No Challenges Remaining podcast sent the feud between Nick Kyrgios and Djokovic nuclear after the Aussie gave his brutally honest thoughts on the controversial world No.1, tweeted the screen shot, which appeared to be from a page within Head’s website, with the caption: “HEAD getting aHEAD of themselves.”

Wide World of Sports attempted to find the page on Head’s website but could not.

Djokovic has won eight Australian Open titles and will play for his ninth tomorrow night when he faces Russian star Daniil Medvedev, who has won 20 straight matches and is arguably the hottest player on the ATP Tour.

While the Serbian star will start Sunday night’s match a warm favourite, Medvedev is arguably the toughest match-up you could throw at the 17-time Grand Slam champion.

The pair have played each other seven times with Djokovic holding a narrow 4-3 edge, although the Russian world No.4 has won three of their last four clashes.

They last played in November in the ATP Finals, with Medvedev winning emphatically, 6-3 6-3 on his way to the biggest title of his career. He also beat world No.2 Rafael Nadal and world No.3 Dominic Thiem in that tournament. 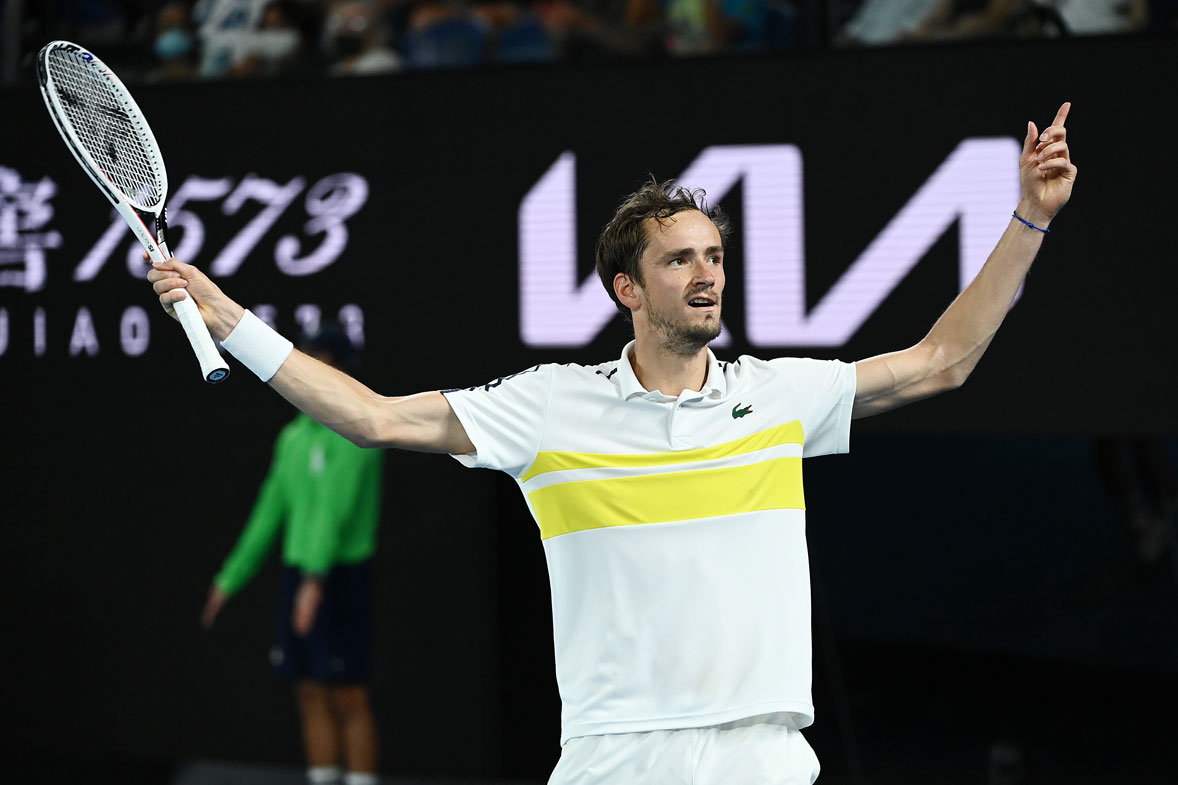 Speaking ahead of Medvedev’s sparkling straight sets semi-final victory over Stefanos Tsitsipas Nine’s Jim Courier said Djokovic would be far happier facing the Greek for the trophy on Sunday night.

” … if he plays against Medvedev it’s going to be super physical and keep in mind in the third round of this tournament Novak suffered an injury to his mid-section and that stymied him a little bit,” Courier told Wide World of Sports’ The Morning Serve yesterday.

“He’s managed his way to another final, don’t get me wrong, he knows how to pull a rabbit out of the hat, but he hasn’t been 100 per cent and going up against Medvedev promises to be a very, very physical encounter one would think.

“And I think that Novak would relish something that was a little bit more predictable and possibly a little shorter.”

There is already a bit of an edge to the final, with Djokovic telling Eurosport on Thursday night that, having won all eight Australian Open finals he has played on Rod Laver Arena, he had nothing to fear from a ‘next gen’ opponent that is yet to change tennis’ world order, with ‘the big three’ of Djokovic, Nadal and Roger Federer still the giants of the sport.

“Certainly they will be the leaders of the future of tennis, without a doubt, but I’m not going to stand here and hand it over to them,” he said.

“I’m going to make them work their arse off for it,

“With all my respect about the other guys, they still have a lot of work to do.”

Medvedev, who is never one to shirk a fight, used Djokovic’s words against him after winning his semi-final, claiming that he was under no pressure to win, because the Serbian had to make every post a winner to chase down Federer and Nadal at the top of the Grand Slam leaderboard.

“I think he’s the favorite because he didn’t lose. In eight occasions that he was here in the semis he won the tournament,” Medvedev said after his semi-final win.

“I’m the challenger, the guy that challenge the guy who was eight times in the final and won eight times, and I’m happy about it.

“When I say no pressure, for sure when we get out there we both feel pressure. I want to win my first one. He wants to win No. 18. We don’t know for who the crowd is going to be.

“It’s all the small details. I think if we talk in general, well, I have nothing to lose, to be honest.”

Medvedev added that Djokovic had every right to be treated as tennis’ king until someone took his throne from him.

“When Novak says he’s not gonna hand anything to somebody, I believe him. I’m not gonna say I don’t trust him. I trust him,” he said.

“Never know how the match is going to go. I would say to win a Slam, especially against somebody (like) Novak, is already a big motivation, and I don’t think there is anything that can make it bigger.

“I like Novak. I appreciate him as a tennis player, and I should say as a person.

“So I don’t take these words for sure as something negative. As I say, I’m quite motivated without those words.”

Medvedev has grown a reputation for using external sources to put a chip on his shoulder, giving him an edge when he walks out onto the court.

He relishes crowds that barrack against him, in much the same way as Djokovic does.

So, whoever from Head erred by publishing a pre-emptive web page celebrating a Grand Slam victory that Djokovic doesn’t have yet may just have given his Russian opponent ammunition for Sunday.

That’s bad news for the world No.1, even if he does deserve his ‘favourite’ tag going in to what looms as an absorbing Australian Open decider.