Rafael Nadal entered his Australian Open quarter-final with a 223-1 record when up two sets in a Grand Slam match.

Rafael Nadal entered his Australian Open quarter-final with a 223-1 record when grabbing the first two sets of a Grand Slam match.

Thanks to his own mistakes — and some spirited play by Stefanos Tsitsipas — that mark is now 223-2.

A couple of uncharacteristically sloppy overheads and a framed backhand in a third-set tiebreaker began Nadal’s undoing, and his bid here for a men’s-record 21st major championship eventually ended Wednesday with 3-6 2-6 7-6 (7-4) 6-4 7-5 loss to the younger, sharper Tsitsipas.

“Was little bit of everything, no? I missed a couple of balls in the tiebreak that I shouldn’t — that I could not — miss if I want to win. And that’s it,” said Nadal, who briefly left the Spanish portion of his post-match news conference after clutching at his cramping right hamstring.

When he returned, he joked that he did not again want to become a meme as he did at the US Open, when he almost disappeared under a press conference table in pain after succumbing to painful cramps mid-interview. 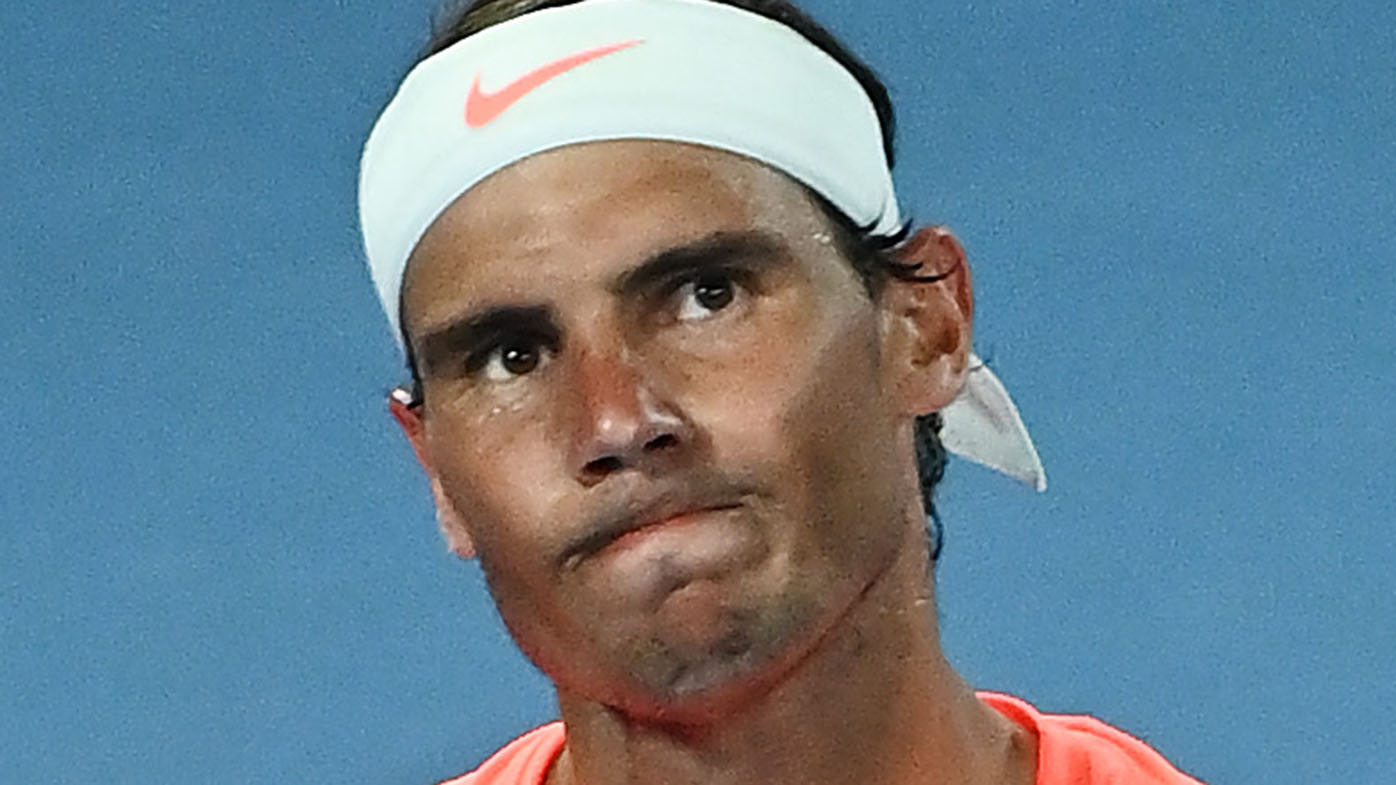 Back to his tennis, “I have to go back home,” Nadal said, “and practice to be better.”

At his put-the-ball-where-he-wants-it best in the early going, Nadal went ahead rather easily, winning 27 consecutive points on his serve in one stretch and running his streak of consecutive sets won at major tournaments to 35, one shy of Roger Federer’s record for the professional era.

Nadal and Federer are currently tied at 20 Grand Slam singles titles, more than any other man in the history of a sport that dates to the late 1800s.

But Tsitsipas never wavered and that surprisingly poor tiebreaker by Nadal — thinking too far ahead, perhaps? — helped hand over the third set and begin the epic comeback.

“I started very nervous, I won’t lie,” the fifth-seeded Tsitsipas said. “But I don’t know what happened after the third set. I just flied like a little bird. Everything was working for me. The emotions at the very end are indescribable.”

Nadal made a total of only 10 unforced errors in the first two sets combined, then 32 the rest of the way — 11 in the third, 14 in the fourth, seven in the fifth.

The only other occasion in which Nadal went from a two-set advantage to a defeat in a Slam came at the 2015 US Open against Fabio Fognini (who just so happened to have lost to Nadal in the fourth round at Melbourne Park this year). 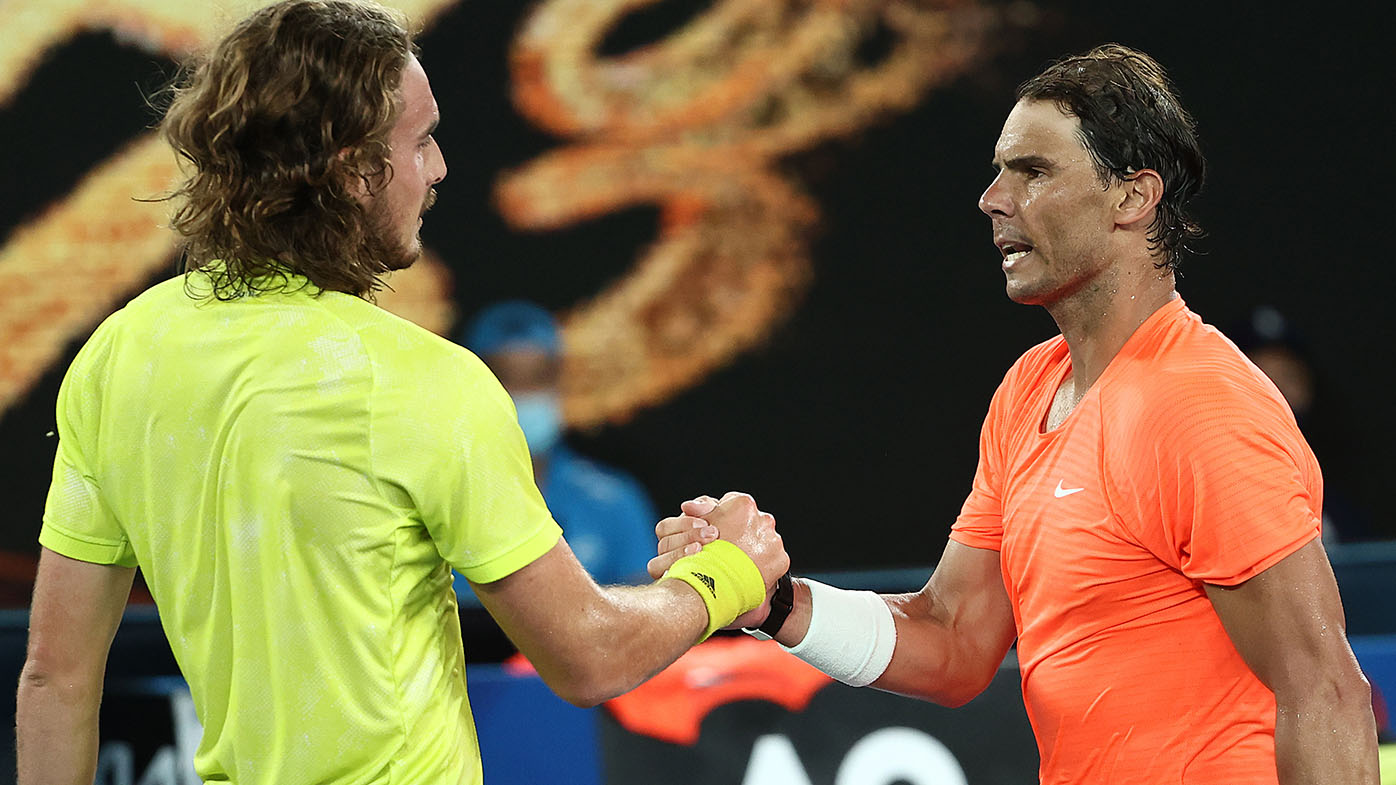 So now, instead of Nadal attempting to surpass Federer, it will be Tsitsipas — a 22-year-old from Greece with a flashy game — who will meet 2019 U.S. Open runner-up Daniil Medvedev in the semi-finals Friday.

Neither Tsitsipas nor Medvedev has won a Grand Slam tournament.

In the other men’s semi-final, 17-time major champion and No.1-ranked Novak Djokovic will face 114th-ranked qualifier Aslan Karatsev, who is making his Grand Slam debut.

Nadal won the 2009 Australian Open, but it is the only major he hasn’t won at least twice, with 13 titles at Roland Garros, four at the US Open and two at Wimbledon. 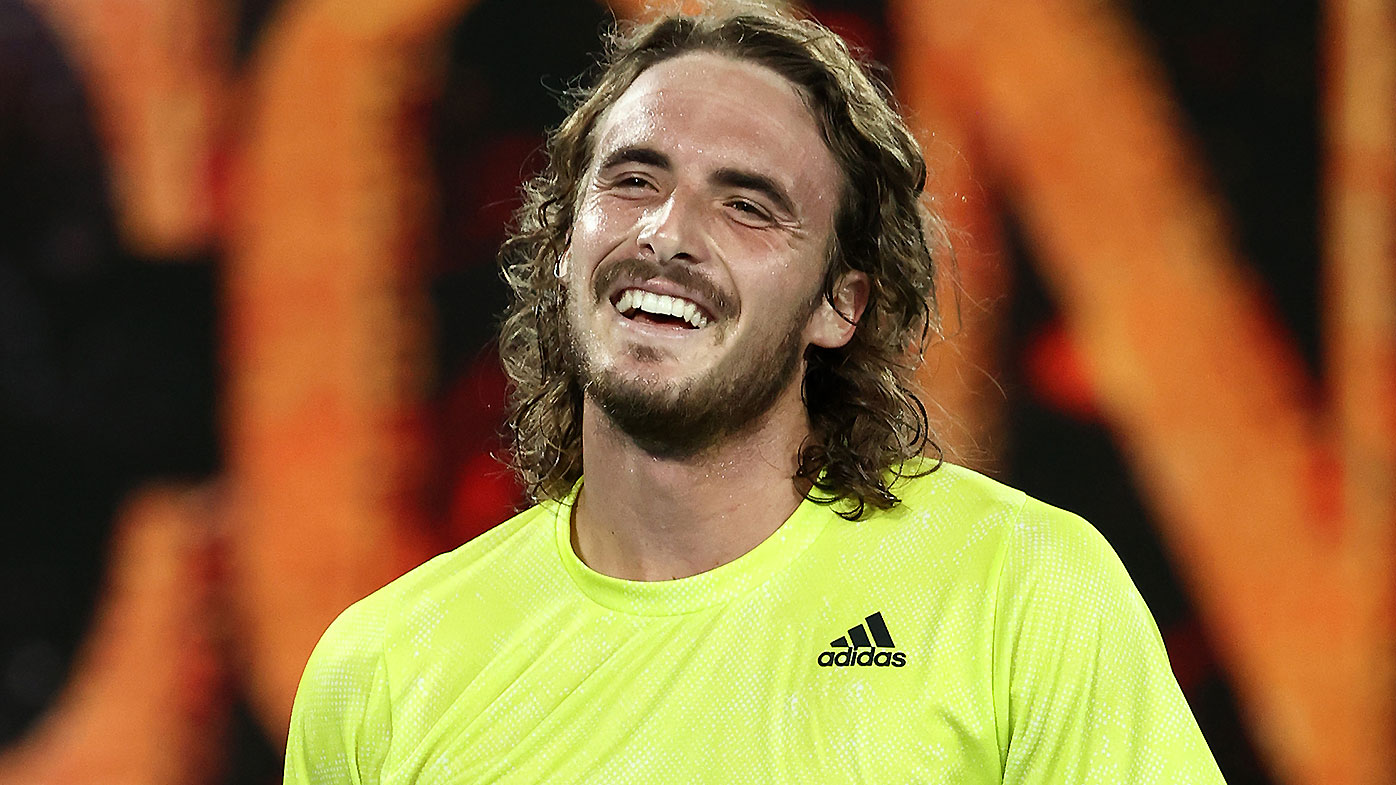 He came into this year’s first major with doubts about his back, citing that as his reason for pulling out of the ATP Cup team competition that preceded the Australian Open and saying the problem prevented him from practicing properly for about three weeks.

But Nadal said after the loss to Tsitsipas that his back was not an issue.

Nadal hadn’t ceded a set at Melbourne Park through four matches; he also won all 21 sets he played at last year’s French Open, where he picked up his 20th Slam trophy (Williams has 23, Margaret Court 24).

Federer hasn’t competed in more than a year after two knee operations.

With squawking seagulls providing an odd nighttime soundtrack at Rod Laver Arena — but no spectators, because they’ve been banned during a local COVID-19 lockdown, and won’t return until Thursday — Nadal always had an answer for anything Tsitsipas tried at the outset.

Rush the net? Here comes an angled passing shot. Hang out at the baseline? Good luck trying to outslug Nadal from there.

It looked like it could be a repeat of their 2019 semi-final in Australia, when Nadal overwhelmed Tsitsipas and allowed him to win just six games.

But this time, Tsitsipas came in after three full days off, because the man he was supposed to face in the fourth round, No.9 Matteo Berrettini, withdrew with an abdominal injury.

That — and a 12-year age difference — might have contributed to Tsitsipas’ being fresher in the late going as they played beyond four hours. Tsitsipas, who’s been pegged as a future star for years, nearly pulled off this sort of shocker against Djokovic in the French Open semifinals in October, going from two sets down to forcing a fifth.

Tsitsipas couldn’t seal the deal back then.

He did against Nadal.

Tsitsipas finally moved out front at 6-5 in the fifth by breaking at love as Nadal flubbed a series of shots, then served out the victory by converting his third match point with a backhand winner.

“I’m speechless. I have no words to describe what just happened on the court,” Tsitsipas said.

“It’s an unbelievable feeling to be able to fight at such a level and just be able to give it my all out on the court.”

Why Brisbane can host the 2032 Olympics

Care for Your Wrist with the CHERRY MW 8 ERGO Mouse

Why Brisbane can host the 2032 Olympics