Virat Kohli could be in hot water after blasting an umpire over a Joe Root LBW shout that was given not out.

Indian captain Virat Kohli could be in hot water after blasting an umpire over a Joe Root LBW shout that was given not out.

Root was seemingly trapped in front by Axar Patel on day three of the second Test in Chennai, yet on-field umpire Nitin Menon gave the England skipper a reprieve, deciding that he’d been struck outside the line. Root was only on one at the time.

India referred the decision to third umpire Anil Chaudhary, who has had a bizarre match. After ball tracking gave an ‘umpire’s call’ verdict on the point where Root was hit, on the back pad close to the stumps, Chaudhary upheld Menon’s decision.

Ball tracking showed that Root was hit partially in line with off-stump and that the ball was clearly hitting. In common-sense terms, it looked stone cold plumb. 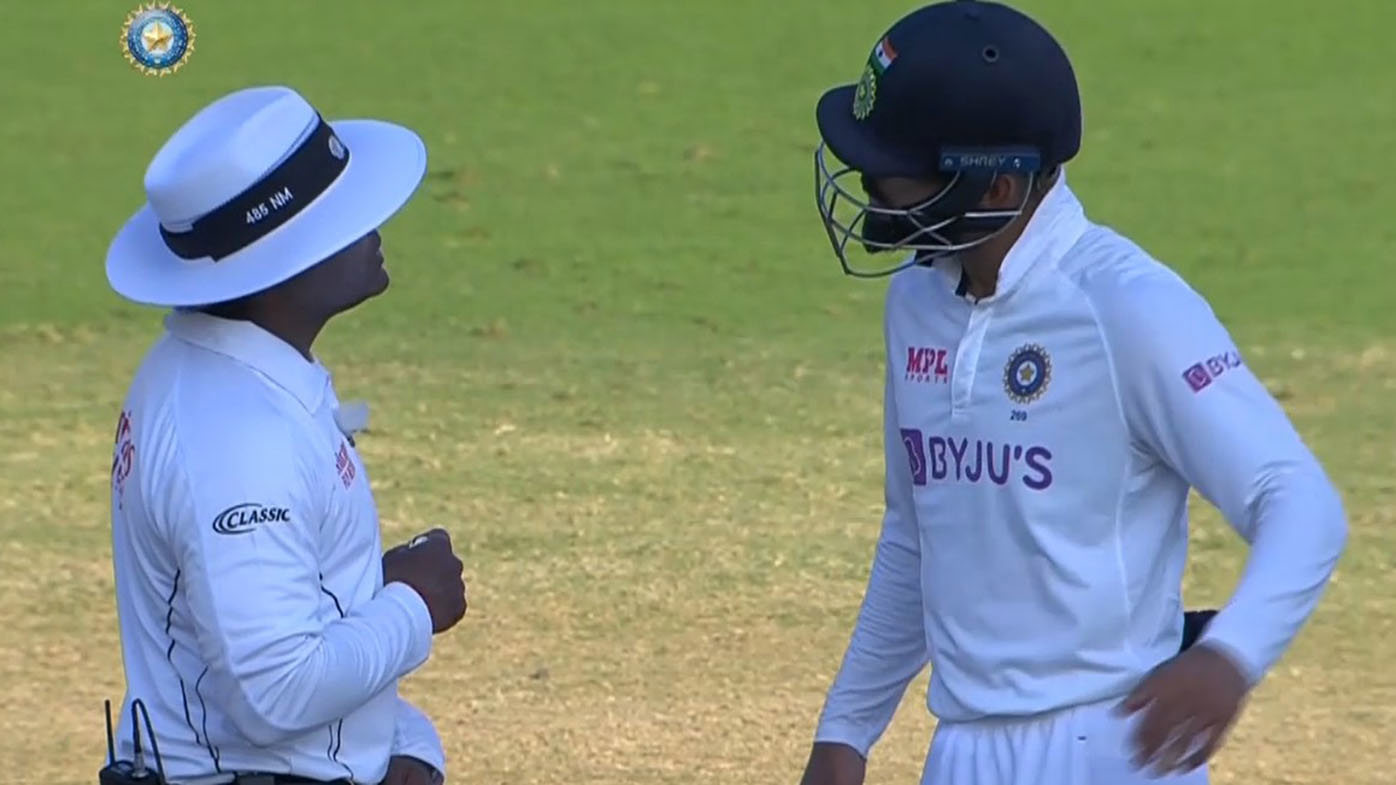 Kohli clearly thought so because the Indian captain was incensed by the upheld not out call. He marched towards Menon and began forcefully arguing his point.

“Wow. I mean, I can understand why the Indian captain is remonstrating,” former England player Nick Knight said on commentary.

“It appeared to me that Joe Root started to withdraw his leg or straighten his back leg and by the time it hit him, his pad, you could see the off-stump.

“I’m giving that out all day long. You see the way that the knee straightens there and by the time it hits him, you can see off stump. I’m flabbergasted.

“My eyes aren’t as good as the Hawkeye but it just looked as though Joe Root had straightened his leg and it hit him bang in front of middle and off.”

Regardless of whether the call was wrong, Kohli may well find himself sanctioned by the match referee for his argument with Menon. The clash may constitute dissent under the ICC’s code of conduct and with Kohli already on two demerit points, with four resulting in a one-match ban, he is walking a fine line.

“It’s not Virat’s place to say [to the umpire], ‘Why did you make that decision?'” Strauss said on Channel 4.

“It’s that slightly superior attitude he shows which grates with opposition players.”

Kohli already caused a stir in the second Test by standing his ground in disbelief after being clean bowled by England’s Moeen Ali.

Root finished the day two not out, with England 3-53 in their second innings.

The visitors trail India by 429 runs with two days remaining, meaning they’re staring down the barrel of defeat and a squared 1-1 ledger in the four-Test series.