You’ve just finished your tennis match and the Melbourne sun has taken its toll. Time for the on-court interview.

You’ve just finished your tennis match and the Melbourne sun has taken its toll. You’re physically and mentally drained, sweat pouring down your face and you’re gasping for breath.

A perfect time to speak live to a global audience of millions, then. Not to mention an added complication at this year’s Australian Open — COVID-19 restrictions require the interviewer to stand two metres away from the player.

No wonder the courtside, post-match interview can make for some awkward conversations.

It’s not easy for interviewers either, with their TV presenting technique and manner under global scrutiny. Or worse still the prospect of becoming a meme.

Interviewers understand they have just matter of minutes to lob a few questions at a player, who probably can’t wait to get back to the locker room.

Those unique dynamics all came together perfectly on Wednesday after Taiwan’s Hsieh Su-wei had just caused an upset by beating 2019 US Open champion Bianca Andreescu in straight sets. 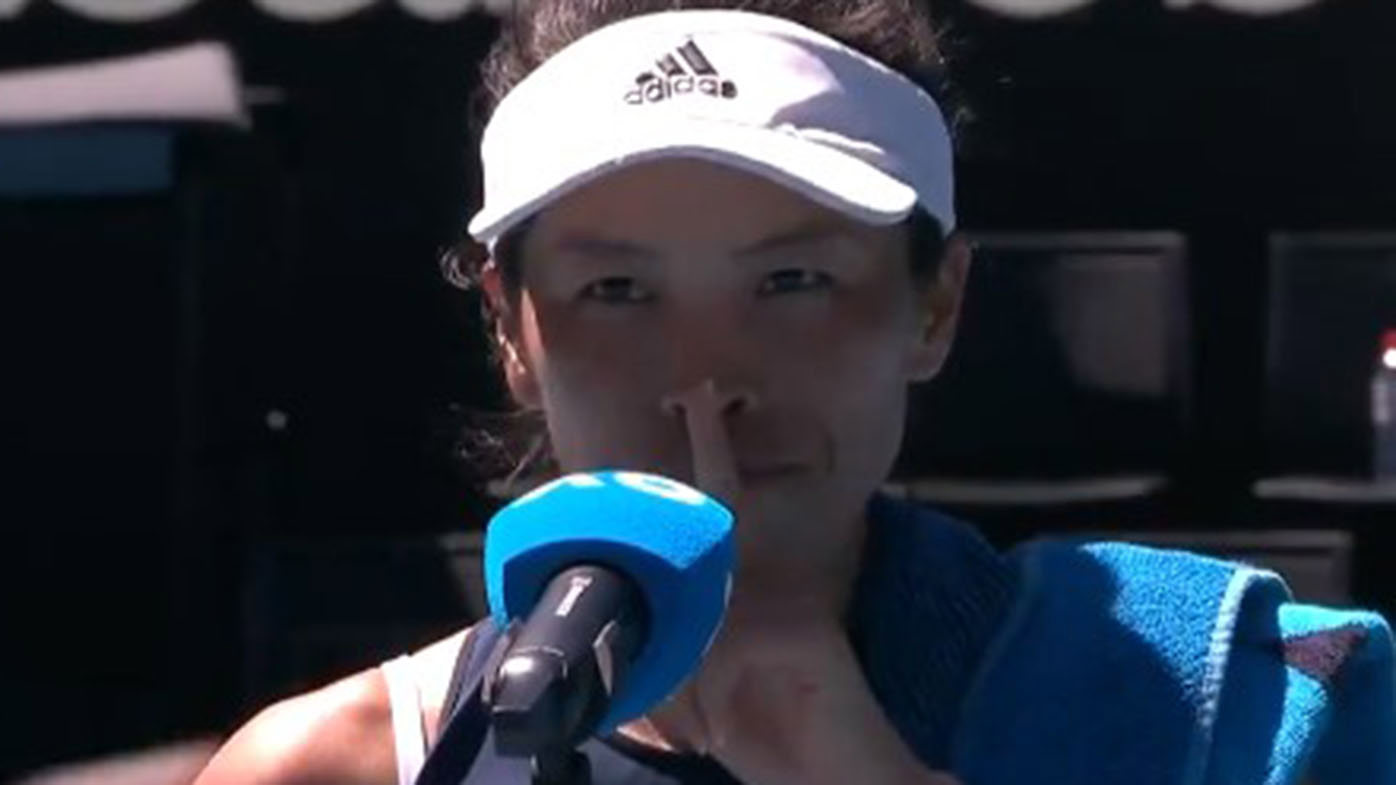 Hsieh, 35, is the world’s top-ranked doubles player but has a history of beating top players on the singles tour.

On-court interviewer Brett Phillips congratulated her on the victory and, after mentioning Hsieh’s age, asked how many years she thinks she can keep playing.

Hsieh delivered a rapier-like riposte to the question.

“Just little reminder [for] you. In Asia, we normally don’t say the girl’s age in the public,” she said, putting her finger to her mouth to shush the interviewer.

Her light-hearted response sparked laughter from spectators inside the court while Phillips had to think on his feet for a follow-up question.

“It’s only a number,” he said, laughing. “You’re feeling pretty good, you look like you’ve got plenty more years left.”

Phillips didn’t immediately respond to CNN’s request for comment asking for his take on the exchange with Hsieh.

‘I CAN JUST LEAVE IF YOU WANT’

Stefanos Tsitsipas knows a thing or two about television production — the world No. 6 has his own YouTube channel, which has 169,000 subscribers.

He writes, directs, holds the camera and edits when he is not competing on the tennis tour.

On Wednesday, the Greek youngster dispatched Gilles Simon 6-1 6-2 6-1 in a particularly one-sided encounter and gave a brunt assessment of the match in his on-court interview.

“I obviously wasn’t expecting it to come so easy. It was a great match from my side,” Tsitsipas innocently said.

The world No.6 then looked surprised by the ripples of laughter and applause from the crowd before realising that what he said might not have been very humble.

“Oh my God, I feel I messed it up already,” added Tsitsipas, before doubling down. “I think I played a spectacular match from the beginning to the end.”

The crowd, and interviewer Jim Courier, were in stitches of laughter as Tsitsipas tried to backtrack.

“What am I even doing here? I mean, what am I doing?” Tsitsipas said with a beaming smile. “I don’t know what his tactic was.”

The final comment was enough to send the interview into disarray as the crowd erupted.

“I can just leave if you want me to?” laughed Tsitipas.

Timing is everything in tennis — and TV.

On Monday, Serena Williams had just won her first-round match in under an hour — perhaps a hint that she had somewhere to be — and was asked how much inspiration veteran quarterback Tom Brady offers her.

The 43-year-old was busy winning his seventh Super Bowl title at the same time as Serena was dispatching her first victim and she was keen to get back to the locker room to watch.

“I gotta go, I gotta go. You’re taking so long,” she jokingly told the interviewer.

“I’m trying to finish and go see the rest. I’m American, we love the Super Bowl. Tom Brady is in my age group, so it’s exciting.”

All this and we’re only three days into the tournament. Whatever you do, don’t adjust your TV set.

*This story originally appeared on CNN and was reproduced with permission